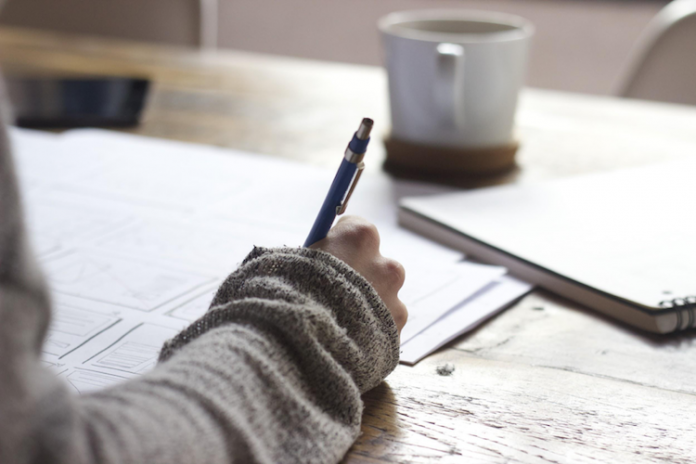 As a college composition instructor, I never run out of examples of terrible writing. Students still transitioning from high school writing habits have a tendency to write papers that all sound the same—and use many of the same tropes and generalizations. I spend most of that first semester trying to un-teach many of the things you probably all had drilled into your heads through middle and high school, mostly for the sake of writing essays for standardized tests.

My students always have a little bit of separation anxiety from the five paragraph essay when I yank it out from under them, though, so they cling tighter to those transitional phrases and cliches that they’re so familiar with using. They’re tried and true, right? They got them decent grades in high school so they must be legit, right?

Well, unless you want your likely overworked graduate or adjunct instructor to start crying into their eighth cup of coffee while grading your paper, there are some things you’ll want to nix from your go-to toolbox for essay writing. And, since I feel for those instructors, I’ll throw in some suggestions for upgrades.

“From the dawn of time…”
If you’ve ever started an essay this way, go ahead and hang your head in shame, shame, shame. It probably preceded a lengthy discussion of something really general and nonspecific about “society” at large, while using the word “society” about fifteen times. Instead, stop worrying so much about having that wide, broad opening at the start of your paper. Don’t hesitate to jump right into the point you’re trying to make. So many of my students spent most of their introductions dancing around the point, and then shoving the whole point of the essay into their thesis statement. Let the intro do its job—it should, you guessed it, introduce the subject of your essay, and act as a logical lead up to the thesis statement.

Wild assumptions and accusations
Unless you have proof that every human being on Earth believes a certain thing, don’t use the word “everyone.” You might as well go ahead and throw the word “society” into the no-no bucket, too, since it’s super broad to begin with, and therefore impossible to really nail down who, exactly, you’re referring to. As a rule of thumb, if you don’t have proof from a reputable source that you can cite in the essay, don’t include it as a fact. I usually tell my kids to use speculative language if they absolutely have to, in these situations. For example, instead of saying “Everyone loves elephants,” you could say something like “It’s possible that everyone might love elephants.” See what I did there? I left some doubt rather than asserting it as fact.

Unnecessary repetition
When my students are struggling to meet a word count, they tend to recycle material from earlier in the essay and repeat themselves. Then, when they come in for conferences, I have to spend a few minutes explaining why I don’t need to be told the same thing twice in a 1,200 word essay. If your essay is on the shorter side (I’d say 10 pages or under) you really don’t need to repeat information. This includes your conclusion. Rather than using your conclusion as a place to tell your reader everything you’ve just told them, use it as a place to leave them with a new or lasting thought. Consider your thesis statement, and the purpose of the essay, and think about what you would ideally like your reader to take away or keep thinking about when they finish reading.

“I think…”
When I was in the seventh grade, I learned one of the best writing tools I’ve ever learned—if the sentence starts with something like “I think” or “I believe,” it’s pretty likely that you can take off that phrase and the sentence will sound much better, clearer, and more straightforward. For example, in an argumentative essay, I could write “I think there should be more consequences for animal abusers.” But, if I drop the “I think,” the sentence becomes “There should be more consequences for animal abusers.” It’s assertive and straightforward. Then, I could move on with facts and points to support my argument. I’m always telling my students to assert themselves in their writing. It also helps to take a step back and try your best to stick with third person point of view, in these cases. It comes off more objective and far more credible when you rely on outside sources and journal articles rather than your own personal beliefs or anecdotes.

Using slang or colloquial/casual language
With the exception of things like personal essays, it’s a good rule of thumb to keep casual language out of your academic writing. If you’re writing an essay about Middle Eastern politics, for example, you might not want to write it like an email to your best buddy. Your audience is going to be your instructor, who might be a graduate student, or a tenured professor—either way, you need to elevate your language. I’m not saying you should speak outside of your vernacular and use words you don’t really know. I tell my kids that when they’re writing for academia, they need to “wear their ties,” rather than their sweatpants. They need to dress up their language. This essay will be having brunch with the dean, not watching Netflix with your bro.

Naturally, all instructors and professors will probably have different guidelines or requirements, so if they specifically ask you to do something listed here—like write a casual, personal essay, for example—then by all means, follow their cues. But, in general, avoiding these few little things will help you stay in line to write a better essay.

Some B-list suggestions here might include avoiding the five paragraph structure, not using the phrase “as I stated before…” to reference a previous point, and trying to avoid writing a thesis statement that repeats the essay prompt.

Here’s to stepping up your essay game. Happy writing!